Learning to Pitch: An Interview with Scott Williams

There are many interesting stories that make up a minor league season. For me, perhaps the most interesting story of the 2015 is that of Hickory Crawdads reliever Scott Williams.

The native of Berwyn, PA went to Virginia as a catcher, but surgery on both hips in back-to-back seasons limited him to intersquad games as well as some fall games in the outfield.

When he found out that he would be catching at Virginia in his sophomore season, rather than missing another season, Williams transferred to State Junior College of Florida, Manatee-Sarasota in Bradenton.  The Manatee catcher put up a .318/.366/.383 slash in 52 games. However, when injuries struck the team, coach Tim Hill II saw the strong arm of Williams behind the plate and used him out of the bullpen.  He allowed five runs (two earned) in ten innings and struck out 14. Despite the limited work, Williams got onto the radar of the Texas Rangers and he was selected in the 11th round by the club in 2014.

Williams, now 21, struggled in his first pro experience on the mound, which occurred with the Crawdads last summer. The right-hander struck out 14 in 17 innings, but he struggled with control and walked 16, which led to 17 earned runs allowed.

After starting this season at extended spring in Arizona, Williams joined the Crawdads and the struggles of 2014 re-occurred.  Williams finished May with six walks and five hits allowed in 6.1 innings.

However, Williams continued to make the adjustments in his delivery, as well as to the position itself and the young hurler’s work has thrust him to a closer’s role in the Crawdads pen.  In the second half of the season, the young hurler has racked up nine saves in 18 appearances and struck out 38 in 28.2 innings. He has also dramatically cut the walks to just seven in that span.

Williams repertoire features a live 94 mph fastball that has some late movement. He’s developed a slider since last season that he’s shown increasing confidence with as it misses bats. Williams had also toyed with a changeup, but has put it aside for now.

In the following interview, Williams speaks of his transition from behind the plate to the mound and what he’s had to learn along the way. 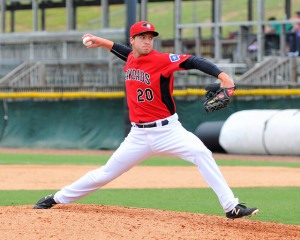 Scott Williams has taken hold of late-inning situations for the Crawdads with nine saves in the second half. (Photo courtesy of Tracy Proffitt)

How did it happen that you went from catching to pitching?

Williams: I went to college as a catcher and then I transferred to junior college because I had two injuries. I was catching the whole year and then our pitching staff got hurt while I was at junior college. The coach thought I had a strong arm so he asked me to close out some games. I could throw strikes right off the bat pretty well. At that level, my fastball was good enough to beat guys, which I was fortunate enough to have. That’s pretty much how it started. He just put me in there because we were a little low on pitching. He thought I could get the job done.

So you go from ten innings and suddenly you’re drafted. How wild a ride is that?

Were you surprised as little as you threw in college, or was the velocity such that scouts said, this gets our attention?

Williams: I always had a good arm growing up, especially behind that plate. That’s actually why I turned into a catcher when I was younger. People always told me that I had a potential to be a pitcher because I pitched a lot in little league. I know that doesn’t mean anything now because that’s a whole different level of baseball. I’ve just always had a good arm growing up and I guess that’s what scouts are paid to do is to find certain tools that guys have that can make them a professional player.

I went to talk with Danny Clark (Rangers minor league pitching coordinator) a month ago and one of the things he said working with you, and Oscar (Crawdads pitching coach Oscar Marin) did as well, was getting you to throw like a pitcher instead of a position player. How did that transition come about for you? What were the adjustments you had to make to go from a position player to a pitcher?

Williams: I’d probably say the biggest adjustment was in the offseason being able to long toss. As a catcher, you’re supposed to be short with your arm action and get rid of the ball quickly, so I was a little tighter with my arm action.

I am still pretty short as a pitcher, I’d say, but being able to long toss and not have to go glove to hand as quickly and have to be on a timer trying to get rid of the ball I’d say has helped me a lot. And just getting used to pitching on a slope which is a lot different than throwing on flat ground all the time. It changes the angle, which changes how your arm works too. What Danny and Oscar have done is help me be a little bit looser and more fluent with my actions as far as throwing.

Williams: I’d say it’s more getting used to the position. When you play a certain position, you find different cues that work for you – little coaching cues. Like hitting, I had a few things that I used to use. Just pitching more, I’ve been able to develop certain things in my mind that I go back to that help me stay consistent with what I do.

I always keep the same routine before games and each day I go out for stretch. Just my throwing routine and what Oscar has been able to do;  he’s been able to coach me well with working on my slider and my fastball and just being fluent with everything and being looser, which has helped me a lot and it helps me repeat everything a lot better. I’m just trying to practice that as much as I can because you’ve got a bunch of reps when you play catch. Being able to use that every day helps you to get a little bit better as you go on.

Did you develop the slider more this year? I don’t remember you using it that much last year?

Williams: It was more of a slurve. It wasn’t as hard but it’s definitely gotten a little bit tighter this year and I’ve been able to throw it more as an out pitch, or at least set up my fastball. I’ve kind of gotten rid of the changeup just to focus on that and they eventually I’ll go back to working on a third pitch. I realize that when you work on two things at once, you’re not really getting better at one significantly. So, it’s better to focus on one and make that better and then have two good ones and then teeter along with a third. It’s been a big help as well. Watching (Adam) Parks and (John) Fasola helped me a lot with that because I saw them. They were big slider guys and they had a lot of success here.

Do you feel like you were able to get more into an attack mode this year? Is that a fair assessment?

Williams: I think it’s a lot more of just having confidence in the position I’m playing and being used to being in the middle of the field instead of behind the plate. Especially when you’re used to playing in college and you don’t have a lot of people watching you.  Not that you get nervous, but it’s a different feeling when you’re in the middle of the field as opposed to behind the plate.

The hitter has to react to you instead of you reacting.  When I was a catcher, I’d react to what the pitcher was doing. I think of pitching as a position where you control everything. So, it’s more of a mindset of no matter what you do, they have to react to you, which is a different mindset and takes a little getting used to.

How wild would it be for you to pitching ten innings in college and then go on to pitch in the major leagues?

Do you approach pitching from the mindset of a catcher, or is there a combination of pitcher and catcher?

Williams: There’s definitely a combination, but I do still try to look at it the same way. I actually almost go back to a high-school type approach with it because in college, everything gets kind of cookie-cutter and guys try to over coach. I think once the ability levels get so good, it turns back more into a simple game where you throw hard in, soft away and just stay with basic sequences and things like that.

As you guys get ready for the playoffs with a couple of weeks to go, you’re starting to get a lot of looks at the back end of the bullpen. How have you embraced that role?

Williams: I love it. As far as my mentality goes as a person, it kind of fits right in. I really enjoy coming in that type of situation and attacking guys and going right after them and seeing if they can beat me instead of having to finesse it. It’s really enjoyable, especially when you get the adrenaline going. It’s a lot of competitiveness, which I love.