The play-by-play log from Sunday (May 1) afternoon’s 4-3 win by Hickory over Lexington shows the play that turned out to be the winning run occurred in the bottom of the seventh inning. It simply reads:

However, the ability of Dylan Moore to deftly run the bases doesn’t show up in the box score, but it turned out to be a key part of the game’s decisive play.

The score was tied at 3-3 with one out in the bottom of the seventh when Moore took a fastball away from Legends reliever Yunior Marte and slapped it down the line in right. Running hard out of the box, Moore slide in ahead of the throw to second for a double.

For the reader going forward, it’s important to note just how smart a baserunner Moore has proven to be in his young pro career. So far in 2016, Moore is second in the South Atlantic League with 12 steals (teammate Eric Jenkins has 15) and has yet to be caught stealing. Looking back further in Moore’s pro career, now in its second season, he has been caught once in 28 attempts. That one came when Eugene (OR) left-handed pitcher Kyle Twomey – a teammate of Moore in high school at El Dorado High in Placentia, CA – picked him off first and Moore was caught in a subsequent run down. The pickoff/ caught stealing occurred on July 29, 2015 in his fourth overall pro attempt. Since then, Moore has stolen 24 straight bases in a row.

While not as fast as the seemingly winged-footed Eric Jenkins, Moore picks his spots, as if he’s attempting to avoid a spotlight going from building to building in the dark during a late-night prison escape.Always on his toes, Moore continually looks to move on the slightest mistake.

He got one as a breaking ball from Marte skipped off the back-handed mitt of Chase Vallot for a passed ball, which allowed Moore to scamper to third.

The batter at the plate was Yeyson Yrizarri, who at 19 has proven to be a tough-hitter with two strikes and that turned out to be key for the play to come. During a weekend in which the Legends challenged him with a steady diet of secondary pitches, Yrizarri got a changeup up and away and lofted it into medium centerfield towards Cody Jones for the second out of the inning.

Ever the riverboat gambler with baserunners in 2016, Mintz sent Moore toward home for the potential go-ahead sacrifice fly. The throw from Jones got to the catcher Vallot ahead of Moore and it seemed the play would be an inning-ending double play, as Vallot caught the ball and turned to tag Moore. 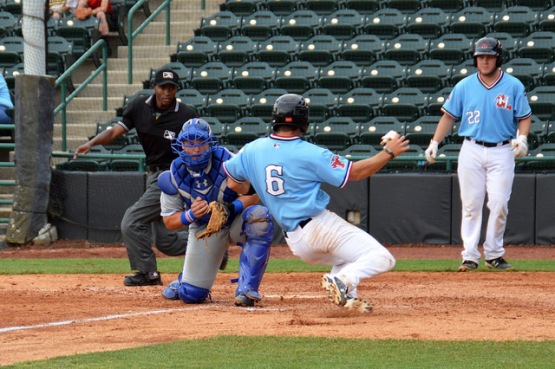 Catcher Chase Vallot with the ball turns to tag Moore (6), while he slides toward the plate (Crystal Lin/ Hickory Crawdads)

Perhaps, Moore sees Vallot juggle the throw, or not. However, in a move that would make a contortionist proud, Moore ducks under the oncoming glove of Vallot and in the same motion reaches his left hand for the plate to score the run, as the ball drops to the ground.

While the play seemed mundane in the box score, or even the play-by-play log, it’s one of those plays that had much more going for it that a simply sacrifice fly.

(Note: Thanks to Crystal Lin of the Crawdads for allowing me to use her pics. Masterful job of photography.)