Spike Owen was all set to be the manager at Hickory for the 2016 season. That was until late February when Texas Rangers third base coach Tony Beasley was diagnosed with cancer and began treatment. So, into the gap stepped Owen.

The experience for Owen with the major league club was a valuable one for him, as he was able to watch big league manager Jeff Banister on a daily basis.

“I was appreciative to be on the major league staff,” said Owen during the 2017 Texas Rangers Winter Caravan held by the Crawdads at Rock Barn Golf & Spa in Conover, N.C. on Wednesday. “I learned much more from him (Banister) than he did from me. He made things easy for his staff, which is what I intend to do with my staff…”

“His dugout presence was unbelievable and I think that’s so important at whatever level, how to react at what’s going on in the game at a given situation and how you handle yourself.”

The reset button has been set and Owen – at least for now – is scheduled to try his hand at managing the class Low-A Crawdads. Banister – who said on Wednesday he’s known Owen since Owen’s playing days at the University of Texas – was impressed with how his long-time friend handled the responsibility given to him last year. Confident in Owen’s abilities as a player developer, Banister said the former big league infielder should be a perfect fit for Hickory.

I had a chance for an interview with Owen prior to the luncheon on Wednesday. Here is some of what he had to say.

You were set up to come here last year and things have a way of, in baseball, I guess like the rest of life, having a change of plans.

Owen: As in everyday life, with baseball it’s about making adjustments. Obviously, I found out late that Tony Beasley, our third base coach, had cancer and so Banny had called me to ask if I would fill in for the year at third base.  (It was) a great experience, obviously being in the big leagues again – I hadn’t been there since ’95 – and that was a great experience and I’m very thankful that I was chosen to do that.

Now that Tony was healthy, I was looking forward to getting back into my managing career. I’ve only managed for one year in 2015.

I’m a little bit familiar with Hickory, when I was roving in  2009-2010 so I’ve been in and out of Hickory for those two years and enjoyed it when I came in. I’m looking forward to spending the summer up here.

Are you more pleased to be managing or would you rather stay in the Majors in some capacity? I know the goal is to always get to the Major Leagues, but you want a managing career as you said.

Owen: It’s a tough question, as you said,  because when I first got into coaching in the Minor Leagues, I wasn’t quite sure what direction and I think there’s probably a lot of guys that are like that. But the more that I’ve been in it, and now experiencing the big league level last year as the third base coach, it gives me more motivation to try to get back there in whatever capacity.

What’s the biggest adjustment you’ll have? You were getting the first-class treatment last year. Is there going to be an adjustment getting back on that bus and going to Lakewood (N.J.) and Hagerstown (Md.)? How do you make that adjustment?

Owen: You know, you just get on the bus and roll. It is what it is. Obviously the things in the big leagues are first class as they should be. But to me, the travel is part of the gig. The fun part is working with the players – the young men and young kids – and trying to help their development to reach their dream of going to the big leagues.

So, I know that my time in High Desert managing, I didn’t know what to expect from High Desert all the way to this first year managing and that age group. I’ve been in Triple-A for a long time and I loved it.

From everything that I’m hearing, I actually don’t know the guys on our team and we won’t know until the end of Spring Training. But with me being in the big leagues last year and not down at the minor league Spring Training, and not being around the younger guys, I’ve got to get acquainted with them and obviously will in Spring Training pretty quick.

I know you won’t know until late March early April and the guys actually get the tickets to fly out here, but one name we’re hearing a lot is Leodys Taveras – the outfielder that everybody is assuming that he’s going to come and play at center field at some point in 2017. What do you hear about him and his tools? Everything that I’ve read is that his tools are off the chart for him being so young.

Owen: I’d have to agree with what you’re saying, because I haven’t seen him also. I have read a little bit about him and obviously the skill set that he brings. So, it’ll be exciting to see him at Spring Training. Again, if he’s slotted to come to us I’d obviously love to have him, but we’ll kind of see how that plays out.

What’s the biggest thing you’re looking for as far as being in Hickory full time?

Owen: I look forward to being in North Carolina and this part of the country. I haven’t spent much time here except my time roving. The Sally League – getting a new league – it’s all going to be new to me. I think just seeing the country and hopefully having a solid year for the Crawdads. I look forward to the baseball side of it – obviously, that’s what I’m here to do – and getting these young guys ready and hopefully have a great year.

What’s an adjustment you’ve made as far as being in one spot as opposed to roving?  Do you like one over the other or does one have more of an advantage?

Owen: Well, when I was roving you get to get home more, which is a huge advantage of doing that job. Going in and out of your affiliations for three or four days and being on the road, and then being able to go home for three, four, or five days.

When you’re in full season you pack up and go to Spring Training and you don’t get home until September. Obviously we have an All-Star break and a few days off, but with me being in Texas, that’s a pretty long flight. So roving that’s really the main thing.

But to me, there’s something about being with the club from the start to the finish that I really enjoy to seeing, because when you rove, you don’t get to see the development like you do when you’re with them every day and see the progress that they’re making. You may come in and not come back in for a month or so. Yeah, they’ve played a really good three days , but you see them for three games and then you’re gone again. So, just kind of starting from the beginning and finishing it off and seeing the progress that they’re making. 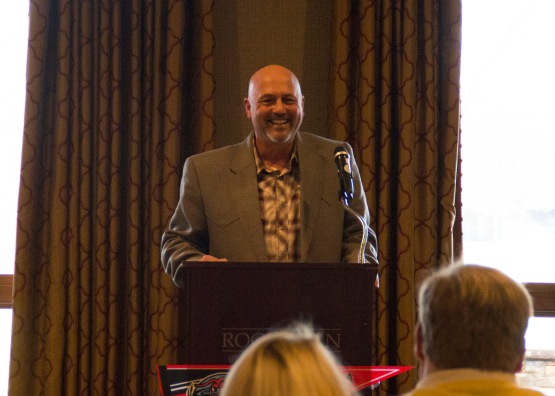