I have a personal blog and occasionally – if not sporadically –  I will write about other things.

One such post I did back in March was about a baseball lifer in this area, Bunker Hill High School baseball coach Marty Curtis. Today, it was announced that Curtis has retired after 47 seasons in the game, the last 35 with the Bears.

While covering a Bunker Hill game in early March, I was struck by Curtis meticulously working the on-deck circle to get it just right. So I wrote the following post. For those not from this area, I hope you get a sense of who he is. The game is richer and the players that played under his tutelage are better men because of giants like Marty Curtis.

This story is a reminder that you (me) are never too old or too important to do the work that needs to be done.

My sports assignment this afternoon was a high school baseball game between Maiden and Bunker Hill played at M.M. Curtis field on the campus of Bunker Hill High. I arrived in time to see the final inning of the JV game, and thereafter, had to wait out the preparation of the field for the varsity game.

While this is going on, I’m passed time on my phone before looking up to check on the progress for when my game might start. I looked around and saw players from both teams stretching in the outfield, and then my glance saw a lonely figure with a push broom walking circles smoothing out the dirt at home plate and the surrounding area.

On the second circular walk, I realize it is Bunker Hill head coach Marty Curtis. Yes, the guy for whom the field is named.

For those that don’t know, Curtis is a high school baseball coach legend in this area. I was privileged to cover the game in 2016 in which he picked up his 400th win.

Never one to focus on himself, the grizzled coach told me in an interview after getting the milestone win, “Well, I’m glad it’s over with, to be honest with you,” Curtis said. “I don’t like that. It just means you’ve been around a long time and you’re old. There’s been a lot of players that have contributed to that. It’s good today and now I’m glad it’s over with.”

Curtis is a throwback of a baseball lifer, who has forgotten more about baseball than I’ll ever know. So I suppose I shouldn’t have been surprised with him being out there getting home plate just right, before he chalked out the batter’s box and foul lines. I thought, “How many times has this man gone through this mundane ritual?”

There, on the field, while his players were getting ready, he was doing his part for the game. It was marvelous reminder that no matter how great one is in their profession, one is never too good to get out there, get dirty, and do what one needs to do to help others succeed.

I’m thankful for people like Marty Curtis and my hope is to strive to be more like him when I grow up. 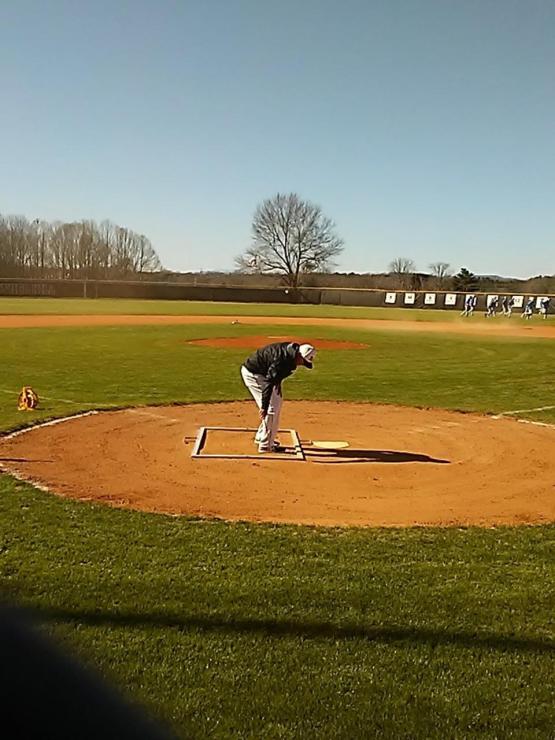 Bunker Hill High School baseball coach Marty Curtis, as he prepared the batter’s box prior to a game in March 2018. Curtis announced his retirement Friday after 35 seasons with the Bears.